Developing Digital Claims Software Yourself Is A Bad Idea!

A few weeks ago, we met with a senior executive in one of the world’s largest insurers. They recalled we had met with them a couple of years ago and said: “After that meeting we decided to build our own digital claim system – unfortunately that was a very big mistake, and has simply led to us wasting the last two years”

The executive went on to explain that they had now realised that off the shelf no code workflow applications represent the future with far more self-configurable capability than they can hope to build themselves which are, cloud-hosted, highly scalable, resilient and secure, at a fraction of the overall ownership cost.

An expensive lesson - but one that many insurers have failed to grasp!

Unfortunately, many IT departments are all too keen to take on digital projects that will be appealing to their staff and will quickly move to shut down any conversations with vendors who may encroach on what they view as their territory. They are often enthusiastically supported by consultants who – no surprise here - will be keen on projects that generate fees.

The best IT leaders, by contrast, view their job as enabling the business to access the most appropriate technology for the job, recognise they have enough of a challenge keeping existing systems running and avoid taking on the challenge of building new capability unless it is easily within their capabilities. One wise CIO that we greatly respect is fond of saying “My job is to build as little as possible myself”.

Typically, unless you are considering a very simple build, the build-versus-buy comparison is heavily weighted towards buy:

On top of that, in-house insurance IT teams are unlikely to have substantial experience in some of the technologies, such as video or unstructured data technology, that are essential to successful digital development, and almost none would rank as world class – so build has greater risk as well. That of course is not a problem at all – insurers absolutely do not need to be world-class at software development to be world-class as insurers.

All this means that insurance company Boards need to push back heavily when IT says: “we can build that”. To be a digital leader you will need to have ensured that you rigorously examine whether that really does make sense.

SMA's independent report on Claims and Risk Management in the Digital World.

The report addresses the system capabilities that will be crucial for success in the digital age and also highlights how 360Globalnet's technology meets those requirements. 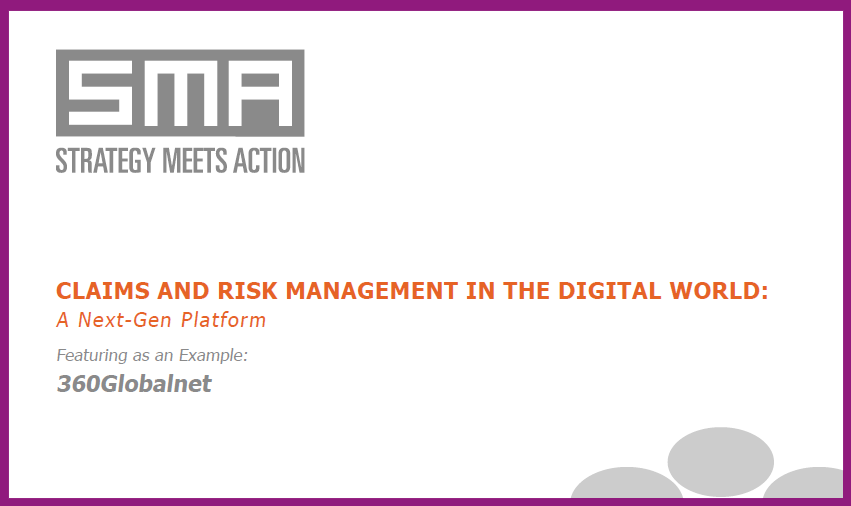