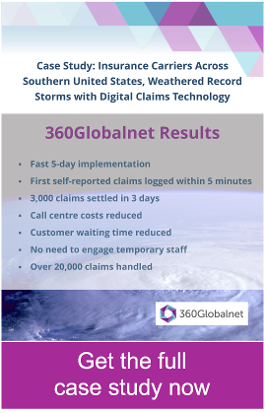 In 2017, southern American states including Florida and Texas endured record storms, with Hurricanes Irma and Harvey making landfall only weeks apart. Large-scale evacuations followed and a state of emergency declared.

Despite these extraordinary circumstances, one Florida-based insurer managed to process over 3,000 claims in just three days using digital insurance claims technology from 360Globalnet.

"We can't be more complimentary about this new digital process, from concept, through to implementation of hurricane damage claims triage. It was impressive how 360Globalnet's team was so responsive, assisting in every way they could, to make the deployment run so smoothly."

Within twenty minutes of going live, self-reported claims began to roll in. Their customers had immediately adopted the new digital process that consisted of completing a simple online form, and uploading video, text and image evidence. The insurer saved on call centre and external resources, because the customer-provided data was clear, making resource allocation simple.

"Instead of having to increase our temporary workforce to handle over 20,000 claims, we implemented this digital system. It allowed for a more efficient FNOL process, enabling workers to process claims more quickly."