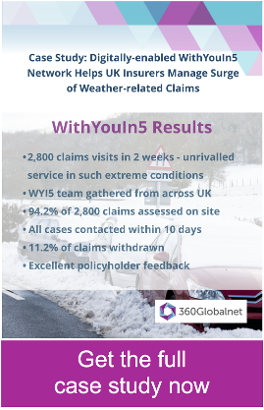 In 2015, the north of the UK was hit by exceptionally harsh winter weather. Scotland's remote far north was particularly affected. As the snow deepened, hard-to-reach areas were cut off and emergencies began to multiply.

Thanks to 360Globalnet's WithYouIn5 network, instead of falling apart under pressure, a leading insurer was able to access a network of vetted agents to assist people in reporting their insurance claims digitally and getting them the help they needed. Policyholders were understandably delighted with this very high standard of customer service

The insurer said: "The response to WithYouIn5 has been astounding. Our policyholders are understandably delighted that someone was physically with them, assessing their claim within days. They know full well how difficult it has been to reach their village yet the WithYouIn5 task force managed it."

The task force was made up of professionals from Liverpool, Manchester, Kent, Yorkshire, Glasgow, Edinburgh and Leicester. 2,800 claims visits were made in only 2 weeks: unprecedented response in such extreme UK weather conditions.

A policyholder said: "Our neighbours were told they wouldn't be visited for months. But our storm damage claim was settled in days."